Blog: The Light of Aurora

The Founding of Aurora Waldorf School

A few weeks later, we’re driving back from a Waldorf conference in Ann Arbor, Michigan, inspired and revved up...a sort of team bus experience…”WE could start a school!”

“We” were a former university science instructor and hairstylist (Susie Tunkey), a graphic artist and marketing entrepreneur (Jeff Tunkey), and a corporate lawyer (Jane Ried), all with young children, all pondering the educational options available. Mrs. Tunkey was also an NYS-certified elementary school teacher, with deep concerns about mainstream education and the sense that Waldorf was a vastly more effective and humane way to teach children. 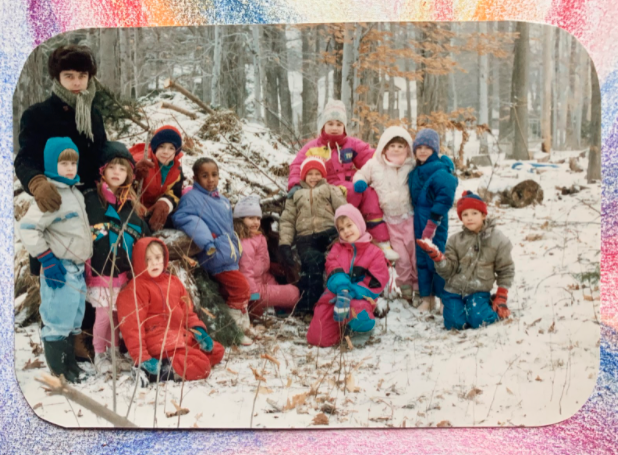 The first Grade One class of Aurora Waldorf School

These three, along with several local friends interested in the work of Rudolf Steiner (Linda Hoeg, Jacquie Doll, Judy Markle, Andy Bienkowski, Betsy Zeiner, and Mike Ried), began meeting weekly under the guidance of long-time Waldorf enthusiast Bruce McCausland, to study the philosophy of this innovative way of teaching. We traveled to several Waldorf schools to observe classes and hosted local conferences featuring expert Waldorf teachers from all over North America. We started playgroups with other young parents, including Mimi Middendorf, Lisa Carrow, Jennifer Morrison-Taylor, and Juliet Bice, to name a few. We spoke in churches, libraries, service clubs, peoples’ living rooms, even at St. John Vianney Seminary! We wrote press releases and discussed and produced so many brochures that our toddlers, overhearing the word constantly, invented a driveway game of crashing their tricycles and yelling “Brochures!”

Hiring our first teachers was a gigantic hurdle; very few Waldorf teachers were being trained every year, and we were in... Buffalo… known worldwide as the Snow Capital of the Rust Belt. But a Kindergarten teacher from the Cape Cod area and a Grade One teacher from Australia answered our ads and, incredibly, moved to Western New York to help get us started.


On September 4, 1991, in rented classrooms at the Orchard Park Presbyterian Church, fourteen Kindergarteners, twelve Grade One students, their families, their new teachers, and the board of trustees celebrated the grand opening of Aurora Waldorf School! 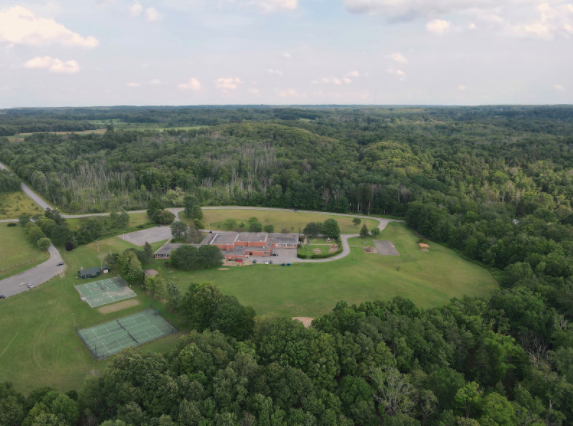 AWS campus, purchased from the East Aurora school district in 2004

During the following summer, rental space became available in the West Falls Elementary School building, our current location. Finding the large, sunlit classrooms, gymnasium, auditorium and large kitchen, and the surrounding rolling hills, woods, open fields, and beautiful ravine and creek all irresistable, the trustees and teachers decided to move the school that fall. This was a challenge for parents living in the City of Buffalo, some of whom left to homeschool or to begin a Waldorf-inspired school in Buffalo.

Most of those parents returned within two years, and AWS continued to grow, each year finding inspired local teachers for handwork, gym and sports, music and world language, as well as preschool and grade faculty. Administrative staff joined to support admissions, bookkeeping, fundraising and building maintenance. Annual and seasonal events like the Michaelmas Festival, Martinmas Lantern Walk, Winter Fair, Spiral of Light, Grade Five Olympics, and May Day became beloved traditions for the school and greater community.

Our first Eighth Grade graduated in 2000, and the following year, our pedagogical program was finally complete, with the hiring of a full-time Eurythmy teacher. In 2004, the East Aurora School District agreed to sell the building and thirteen surrounding acres to AWS. District voters approved the sale, and this beautiful campus was ours. 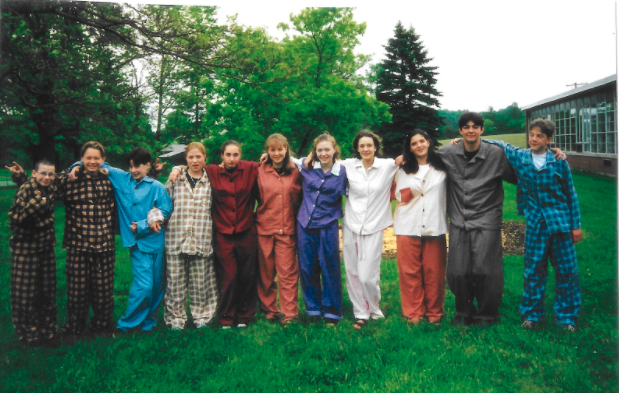 First graduating class in pajamas they sewed themselves!

To those of us involved from the beginning, it’s unbelievable that thirty years have passed. Teachers still active at AWS since those early days include Mrs. Carrow, Frau Bojanowski, and newly-retiring Mr. Tunkey. Others have remained part of the school as block teachers, board members, teacher support, and volunteers. We love to imagine the hundreds of AWS graduates now out in the world, exemplifying social responsibility and environmental stewardship, and still knitting their own socks. While also juggling.